Achievement of students of EEE Dept. of AUST


4th National ICT fest was held at IUT (Islamic University of Technology), organized by IUTCS. It was held for two days (21-22 June, 2012) at IUT campus. Total twenty four groups from different universities participated in the Project completion of the ICT fest. Of them five groups were from AUST. One of the groups from EEE Dept. of AUST (consisting of 3 members Hazzaz Mahmud 4/1, Rana Saha 4/1, Samia Afroz 4/1) got the 1st runner-up position. 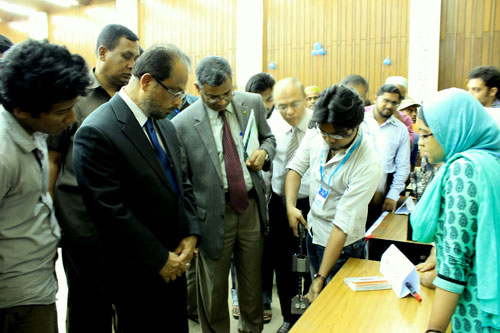 The stick is intended for blind and disabled people who are currently using ordinary sticks or who can't move without someone's aid. It has three sensor elements which are used to detect ranges from obstacles, wetness at its underneath and to detect what's at the bottom of the stick - i.e the terrain. A PING! sonar sensor from Parallax is used to determine target range, a GH311 ultrasonic obstacle sensor is used to map what's at the bottom of the stick and a pair of electrodes are used to detect wetness of ground. A PIC16F690 micro reads these sensors and drives a buzzer, a LED and a motor with PWM. The output indications provided by the micro are distinctive as per sensor. Based on the strength of vibration of the motor or the beeping of the buzzer or the blinking of the LED embedded with the stick a disabled person may determine if he is walking towards a manhole or an edge or a large opening at nearby bottom or something similar. At the same time he/she may get the sense of his/her distance from nearby objects and if he/she is walking in a wet or muddy or potentially slippery terrain. The simplicity of the design makes it easy to use by any person and at the same time the cost of manufacturing such sticks is kept low.